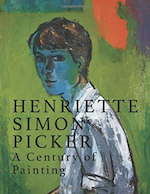 In 1952 Henriette Simon opened her own business with her brother Regi Simon, designing and manufacturing shoes for women to match their handbags and dresses. “Simone Shoes To Match” garnered much attention. In the October, 1952 issue of MaCall’s, her shoes were illustrated by then 24 year old Andy Warhol (page 23 in the scrap book above). In the 1960's she formed one of the first shoe import businesses in the US, and designed her own line, “Simone Shoes, Made in Italy”

Henriette Simon, (b. 1917) was born to German-Jewish émigrés, along with two younger siblings in Jersey City.  In 1928, after a disastrous business venture, her father, William decided to give up on America, moving his young family to Berlin. There Henriette graduated from the Königin-Luise-Mädchen-Lyzeum (Now known as Paul-Natorp-Oberschule) and later attended the Lette-Schule.  The rise of Hitler forced the family to return to New York only days before the Reichstag fire in 1933.

Later that year, Henriette Simon was hired as a designer for world famous I. Miller Shoes at the National Recovery Administration’s recently established minimum wage of $15.00 per week. Thus began a 45 year design career.  Simon left I. Miller after two years to open her own shoe design studio in the Marbridge Building at Herald Square in New York City  on the advice of renowned shoe designer, Mabel Julianelli. She later designed for such companies as Mademoiselle, Palizzio, D’Antonio, Fox, Selby, Gran Sol and  Enna Jetticks Shoes.

In 1983, after retiring from designing and manufacturing shoes, art and design careers came together when Henriette Simon was commissioned  to create the cover for the January 1983 issue of Footwear News Magazine. 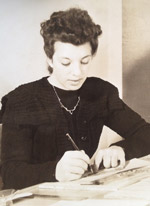 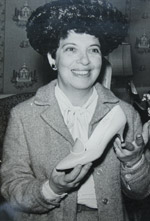